Tight capital can demoralize and destroy… or energize and innovate 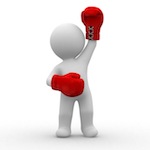 Imagine for a moment that your product is almost entirely a fixed expense in your industry. Whether you have one customer or one million customers, your infrastructure performance has to match your competitors’ or else potential customers won’t give you the time of day.

Now imagine that your larger competitors each have three times the revenue to plow into their infrastructure – and this is a cutthroat pricing, razor-thin margin business.  Unless you can find a way of reducing your capital investments by half or more, while still providing the same capabilities as your competitors, you are doomed.

Is your company up to that challenge?

This Is Not A Drill

No, this isn’t just a theoretical exercise. This is T-Mobile’s world. To play in mobile service, you have to blanket the nation with cell towers and other equipment just like AT&T and Verizon do… but with one third of their revenues to generate an acceptable return on those assets.

Earlier this month I sat down with a T-Mobile finance executive and learned why T-Mobile even exists today at the wrong end of such lopsided economics. He boiled it down to one word, “Scrappy.”

Rather than being demoralized by their disadvantage, “Scrappy” is woven into T-Mobile’s DNA to figure out how to accomplish everything using fewer resources. It’s not about scrimping on performance, it’s about doing more with less – a variation on that old dictum: Work Smarter, Not Harder.

T-Mobile has even enshrined “Scrappy” in their list of corporate values. Alongside the likes of “Customer Delight Drives Our Action” and I Am T-Mobile – Count On Me” stands “Go Big, Stay Scrappy.” Show you are smarter than your counterparts who work for your competitors.

T-Mobile’s value was borne out of necessity and fueled by the need to survive (and survival is never guaranteed). Even so, “Scrappy” is a powerful example of how much can be squeezed out of less capital when the culture genuinely embraces it as a value to define success.

It’s a definition of success that’s foreign to most organization. But imagine, “What would my profits and ROI be if that same T-Mobile scrappy attitude dominated our project teams?”